EDITOR’S NOTE: Ben Smith is The New York Times’ media columnist. He was founding editor in chief of BuzzFeed News. Before that, he covered politics for Politico, The New York Daily News, The New York Observer and The New York Sun.

The trailer for Tucker Carlson’s special about the Jan. 6 mob at the U.S. Capitol landed online Oct. 27, and that night Jonah Goldberg sent a text to his business partner, Stephen Hayes: “I’m tempted just to quit Fox over this.”

“I’m game,” Hayes replied. “Totally outrageous. It will lead to violence. Not sure how we can stay.”

The full special, “Patriot Purge,” appeared on Fox’s online subscription streaming service days later. And last week, the two men, who are both paid Fox News contributors, finalized their resignations from the network.

In some ways, their departures should not be surprising: It’s simply part of the new right’s mopping up operation in the corners of conservative institutions that still house pockets of resistance to Donald Trump’s control of the Republican Party. Goldberg, a former National Review writer, and Hayes, a former Weekly Standard writer, were stars of the pre-Trump conservative movement. They clearly staked out their positions in 2019 when they founded The Dispatch, an online publication that they described as “a place that thoughtful readers can come for conservative, fact-based news and commentary.” It now has nearly 30,000 paying subscribers.

Their departures also mark the end of a lingering hope among some at Fox News — strange as this is for outsiders to understand — that the channel would at some point return to a pre-Trump reality that was also often hyperpartisan, but that kept some distance from Republican officials. Fox’s chairman, Rupert Murdoch, recently deplored Trumpism while acting as if — as Bloomberg’s Tim O’Brien noted — he didn’t run the company.

The reality of Fox and similar institutions is that many of their leaders feel that the tight bond between Trump and their audiences or constituents leaves them little choice but to go along, whatever they believe. Fox employees often speak of this in terms of “respecting the audience.” And in a polarized age, the greatest opportunities for ratings, money and attention, as politicians and media outlets left and right have demonstrated, are on the extreme edges of American politics.

Carlson became the network’s most-watched prime-time host by playing explicitly to that fringe, and “Patriot Purge” — through insinuations and imagery — explored an alternate history of Jan. 6 in which the violence was a “false flag” and the consequence has been the persecution of conservatives.

Goldberg said he and Hayes stayed on at Fox News as long they did because of a sense from conversations at Fox that, after Trump’s defeat, the network would try to recover some of its independence and, as he put it, “right the ship.” 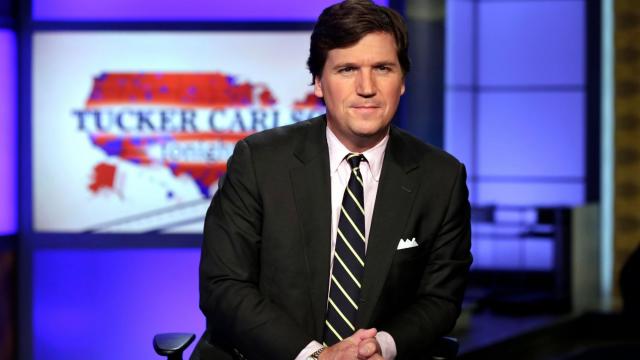 “Patriot Purge” was “a sign that people have made peace with this direction of things, and there is no plan, at least, that anyone made me aware of for a course correction,” Goldberg said. “Now, righting the ship is an academic question. The ‘Patriot Purge’ thing meant: OK, we hit the iceberg now, and I can’t do the rationalizations anymore.”

Hayes, 51, and Goldberg, 52, spoke to me over video from their homes in the Washington, D.C., area, both clad in athleisure and sporting graying beards. When they joined Fox News in 2009, they were the leading ideological players in the very different conservative movement of the George W. Bush years. Hayes had championed the invasion of Iraq at The Weekly Standard, while Goldberg had just published a book called “Liberal Fascism.”

They now find themselves in a group of Americans who think the threat that Trump poses to America’s democratic system outweighs many other political differences. Hayes said he was particularly concerned about Fox lending support to the idea “that there’s a domestic war on terror and it’s coming for half of the country,” he said. “That’s not true.” Particularly disturbing in “Patriot Purge,” he said, “was the imagery of waterboarding and suggestions that half the country is going to be subject to this kind of treatment, that’s the same kind of treatment that the federal government used when it went after al-Qaida.” Carlson, Hayes said, “pumped that stuff out into society, and all you need is one person out of every 50,000 people who watch it to believe it’s literally the story about what happened, that it’s true in all of its particulars and all of its insinuations. And that’s truly dangerous in a way that the usual hyperbole that you get on a lot of cable news isn’t.”

Hayes said he had been particularly disturbed recently when a man at a conference of the pro-Trump group Turning Point USA asked its leader, “When do we get to use the guns?”

“That’s a scary moment,” Hayes said. “And I think we’d do well to have people who, at the very least, are not putting stuff out that would encourage that kind of thing.”

For his part, Goldberg said he has been thinking about William F. Buckley, the late founder of National Review, who saw as part of his mission “imposing seriousness on conservative arguments” and purging some extreme fringe groups, including the John Birch Society, from the right.

“Whether it’s ‘Patriot Purge’ or anti-vax stuff, I don’t want it in my name, and I want to call it out and criticize it,” Goldberg said. “I don’t want to feel like I am betraying a trust that I had by being a Fox News contributor. And I also don’t want to be accused of not really pulling the punches. And then this was just an untenable tension for me.”

Now, their views have put them outside the current Republican mainstream, or at least outside what mainstream right-wing institutions and politicians are willing to say out loud. But although in recent years both appeared occasionally on the evening show “Special Report” and on “Fox News Sunday,” which the network classifies as news, it has been years since they were welcome on Fox’s prime time, and Goldberg clashed bitterly with prime-time host Sean Hannity in 2016.

(Hayes and Goldberg emailed their readers Sunday to announce their departure.)

Despite the former contributors’ hopes, Fox’s programming has hewed to Trump’s line, as have its personnel moves. The network, for instance, fired the veteran political editor who accurately projected Biden’s victory in the key state of Arizona on election night, and has hired former Trump White House press secretary Kayleigh McEnany.

Hayes and Goldberg are the first members of Fox’s payroll to resign over “Patriot Purge,” but others have signaled their unhappiness. Geraldo Rivera, a Fox News correspondent since 2001, captured the difficulty of internal dissent at the network when he voiced cautious criticism of Carlson and “Patriot Purge” to my colleague Michael Grynbaum. “I worry that — and I’m probably going to get in trouble for this — but I’m wondering how much is done to provoke, rather than illuminate,” he said.

On air, two programs with smaller audiences than Carlson’s scrambled after his special to rebut the false theories presented in “Patriot Purge.” “Special Report” called in a former CIA officer on Oct. 29 to debunk “false flag” theories. And on “Fox News Sunday,” Chris Wallace turned the same question over to one of Trump’s few foes in the Republican congressional delegation, Rep. Liz Cheney of Wyoming.

Carlson called Hayes’ and Goldberg’s resignations “great news” in a telephone interview Sunday. “Our viewers will be grateful.”

A Fox News spokesperson, Irena Briganti, declined to comment on the resignations but sent data showing that independents watch Fox.

And yet resignations such as Hayes’ and Goldberg’s remain rare at Fox. Cable contributor jobs are lucrative — often six figures or more — and open doors to book deals and speaking engagements. Senior journalists and producers at Fox typically receive a salary premium for the opprobrium that comes with working at the company in New York, Washington or Los Angeles. That means there aren’t easy ways to leave without taking a steep pay cut.

“There are lots of people there that I respect and like and consider friends, and they’re making a decision based upon how to provide for their families and deal with their careers and all of that. And I’m not going to second-guess them,” Goldberg said. “And there are also lots of people over there who think the Fox opinion side today is awesome.”